Learn About Llamas and Alpacas

Increasing in popularity since the 1970’s, the llama and the alpaca are most versatile and delightful companion animals. They are members of the Camelid family, genus Lama, which originated in the Mississippi River area about 10 million years ago. The word Lama is often used to refer to both llamas and alpacas. The four natural camelid species are the Bactrian and Dromedary camels, and the guanaco and vicuna in South America. Llamas and alpacas have been developed and selectively bred from the guanaco and vicuña respectively by the Incan Indians over the last 6,000 years.

The llama was domesticated primarily as a beast of burden, while the alpaca was developed as a fiber producer. Both are bred today to select for their gentle nature. Llamas weigh from 240 to 450 pounds and stand up to 48 inches at the shoulder. Alpacas are about half to a third smaller. Both are very intelligent, strikingly beautiful and carry themselves with serene pride. They mature at about three years of age, although females have conceived at, and males have bred viably as young as one year. They live up to 25 years. Because of the leather-like pad on the bottom of each two toed foot and a pacing (same sided) gait, llamas are sure footed, low impact animals on even delicate alpine terrain. Given the “fight or flight” enigma, they are flight oriented. Communication is a series of hums and clicks, with subtle body, head, ear and tail movements to express affection, dominance, submission or anger. They have an “alarm call”, which sounds like a horse whinny, to alert others of perceived danger. Their nature is curious, gentle, and somewhat aloof. Their intelligence and self-respect makes training a joy.

Today llamas and alpacas are still used as pack and fiber animals by the Indians in Peru, Bolivia and Chile. As the camel is called the Ship of the Desert, the llama is aptly called the Jeep of the Andes. Commercial packing operations are common in the U.S. including the Northeast. Camping and hiking enthusiasts are using llamas to lighten the load, for they can carry everything from tents and food to roadside trash. Using llamas as golf caddies is becoming increasingly popular. They make excellent guardian animals for sheep, calves and goats, protecting against dogs and coyotes. Although they are not riding animals, llamas can be trained to pull carts and wagons, or skiers. They also make wonderful 4-H projects. The fiber from both llamas and alpacas is highly prized. It can be spun, knitted, woven or felted – outstanding artisans are producing “Fifth Avenue” quality garments from llama and alpaca today. Many llamas and alpacas are taken to visit schools, nursing homes, parades, elderhostels, bazaars, camps or grand openings where their unique presence inevitably thrills and delights. Due to their calm (and calming) nature, they are superior as therapy animals. Because they are so adaptable and responsive, easy to care for and intelligent, there are llamas or alpacas to fit almost everyone’s needs and interests. While there are many uses for llamas and alpacas, perhaps their most desirable trait is as companion animals the privilege of camelid/human interaction, their highest and best use.

Llamas and alpacas can travel well in many types of vehicles,from vans to pickup trucks with high caps, to trailers and station wagons. They usually kush (lie down) once the vehicle begins to move. Tying is not recommended and can be dangerous.

Shelter and containment needs are simple. A four foot high, closely woven or electrified wire (not barbed wire!) fence is recommended, primarily to deny entry to predators such as dogs and coyotes. White tail deer pose a problem as well since they can pass along a potentially lethal parasite. It is almost impossible to fence out deer, so a rigorous deworming program is necessary to prevent invasion of the meningeal larvae. A three sided shelter or shed to protect from intense weather and sun is all that is needed, even in New England winters. Llamas and alpacas prefer the freedom of a run-in barn rather than a closed stall. A sand pile for rolling and play makes a happy herd. Although their normal day in the South American mountains would include roaming miles in search of food, they adapt readily to smaller acreage. One acre of quality forage can support up to four animals. They are social creatures and thrive best in the company of other llamas and alpacas; it is necessary to have a minimum of two. Behavior aberrations are seen in animals kept singly, or in animals that have been bottle-raised and deprived of normal herd interaction.

Adult llamas eat about one bale of hay per week each and alpacas will eat less than that. Llamas and alpacas require supplemental minerals and can be fed grain regularly if needed to reach their protein or other nutritional requirements. The cost of feeding a llama or alpaca is comparable to that of an average sized dog! They need access to fresh, clean water at all times. Llamas and alpacas are browsers and will eat many types of plants, brush, and leaves. There are a few plants poisonous to llamas and alpacas, such as wilted cherry leaves, mountain laurel, yew, and rhododendron. (GALA produces an informative booklet on poisonous plants.) You should make plans with your local veterinarian for annual rabies and clostridia vaccinations. A schedule should be determined for appropriate deworming, weighing, and toenail trimming. Hot weather comfort is assured by shearing each spring to prevent heat stress.

Female llamas and alpacas are induced ovulators (ovulation is induced by the act of breeding) and therefore can be bred to give birth at any time of year. Gestation is 11 to 12 months. Birth of a single baby is usually in daylight hours. Twinning is rare. Mothers (dams) often deliver standing and the 20-35 pound baby llama (cria) is running with the herd within an hour or two. Alpaca crias weigh between 12-20 pounds. Crias grow at the rate of one half to one pound per day, usually doubling their birthweight within 30-40 days. Weaning is best done by the dam and takes place around six to nine months of age. Young males are best separated from the open females by one year of age.

It is unlikely the Inca civilization would have thrived without the fleece from their long domesticated and highly revered “Camels of the Clouds”. According to archeological findings, camelid wool has been in use for over 6,000 years. The Inca weavings were amazingly fine, occasionally having 190-240 threads per inch! Vicuña fiber was reserved for royalty. The fiber of the vicuña is only 6 to 10 microns in diameter; alpaca and llama fiber runs from 10 to 80 microns. For comparison, Merino sheep, the finest, is 12 to 20 microns (a micron being one millionth of a meter). Llama and alpaca fiber is technically hair due to its cellular construction. Today the fiber is used primarily by artisans who desire unique materials. Llama and alpaca fiber is often felted into hats, gloves, vests and boots. When spun, yarn can be knitted, crocheted or woven. The fiber is medulated, or partially hollow; trapped air adds significantly to its insulating quality. Alpacas are a single coat animal, sheared yearly for their fine soft fleece. Their fiber has been tested for strength and is about 35 times stronger than human hair. Llamas are often two coated animals, having both longer, protective guard hairs and a down undercoat. By grooming, owners may collect under-coat wool during the time the llamas are shedding, usually spring or fall. In this manner, the coarser, more prickly guard hair is not collected as it would be if sheared. Raw llama and alpaca fiber contains only 7% lanolin, compared to about 35% found in sheeps’ wool: scouring, or the detergent cleaning step, is not needed in preparation for spinning. Natural colors of llama and alpaca fiber range from white to black, red, silver, caramel, coffee, fawn, and gray solids; piebald, pinto or appaloosa and all combinations of these. Llama and alpaca fiber may be used alone or elegantly blended with silk, sheep wool, cashmere, etc. for striking effects, both visually and to the hand. 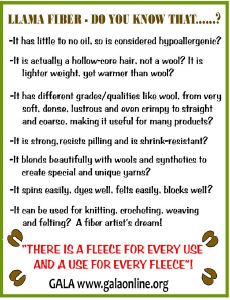 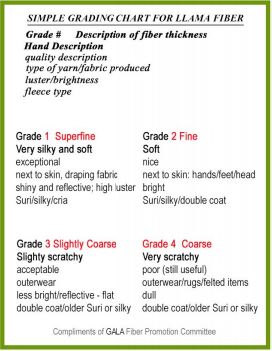 These are available for download for use at YOUR next fiber event or anywhere you take your llamas. They can be printed as single sheets or two-sided and cut into individual handouts. Click here for a printable copy

There are several excellent venues for showing llamas and alpacas. The largest and oldest, Alpaca and Llama Show Association (ALSA), organizes and provides the standards for halter, performance and youth classes nationally. There are local and regional ALSA shows, leading to a national championship each fall. There is also the Pack Llama Trial Association, which sets the standards for pack llamas. Llamas compete for Certification against those standards on three levels of course difficulty. Jackpot Obstacle shows challenge the capabilities of llamas performing in a natural environment.

Recommended Practices in Caring for Llama and Alpacas

We encourage you to download “Recommended Practices in Caring for Llamas and Alpacas” which is an excellent reference for basic camelid care.  (Note the file is set up to be printed 2-sided and then folded in half to create the pamphlet.) 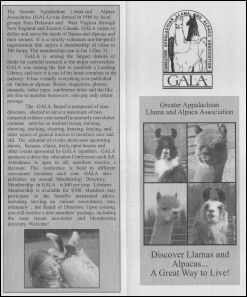 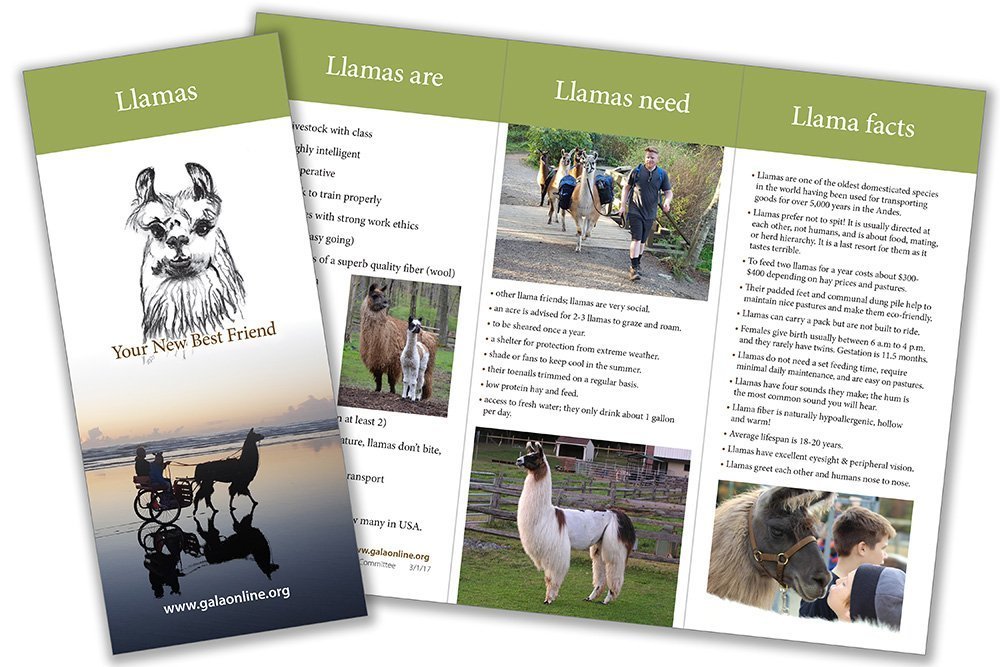 For non-members to purchase this brochure – 25 brochures for $5.00 plus shipping. Contact cmillard at usj.edu to arrange.
Members can still get their complimentary brochures by contacting Carol Millard.