Tupac’s presence here on the GALA website – as the first of many memorials to beloved lamas and lama people – is an honor. He may be known to many for his travels and exploits, but he represents the story of everyone’s ‘first llama’: that llama who taught us and brought us humans to that place of gentle understanding. Tu, you live forever in the hearts of your grateful friends everywhere.
Highlights of Tupac’s life:
– Born in a Maryland zoo and sold to a game farm in Southwick, MA. In December 1983, age 1, purchased by Don and Hilary Ware, and placed unceremoniously in the back of a pickup truck for the trip home to Maine.
– Named, for his regal bearing, after the most famous Incan king.
– Immediately took on guardianship of our sheep flock, although he preferred the company of the horses.
– Demonstrated, early on, his jumping ability and love of children by leaping (our 5 foot) fences regularly, to stand in the road, stop the school bus, and visit through the open door.
– Was a regular visitor to elderhostels, local elementary schools, nursing homes, libraries, parade routes and live nativities (with and without a ‘hump’).  He was a fixture at the Fryeburg Fair lama barn until a few years before his death. He was Versatility Champion at the Big E Llama Show (and never had to go to a show again after that!). Tu also went to all the GALA Conferences in New England.
– Became a professional packer, trained and used for many summers in western Maine by Steve Crone and Telemark Llama Treks. Tupac’s trekking experience literally saved a group of less experienced llama campers on a 3 day hike one May on Bigelow Mountain in Maine. Faced first by a ¼ mile boulder field then by an 11 foot cliff – neither of which we could go around.  Tupac was placed in the lead. With his lead line draped over his neck, he thoughtfully picked a route through the boulder field, the rest of us following, and got our line of hikers and llamas across with only one torn toenail. Then, above the cliff – pack and lead line removed – he gracefully jumped (every other llama watching carefully!) onto a narrow outcropping 5 feet straight down, down another 6 feet of cliff and crawled under a huge blowdown, waiting on the other side. Every other llama did the same and the trip was saved.
– Marched for many years in Terry Beal’s Maine Llama Drill Team.
– Filmed an ad for the local Dodge car dealership featuring himself and two other llamas with their heads stuck out of three sunroofs cut into a minivan roof. Word has it that traffic into the dealership improved dramatically, with customers asking where they could get a llama, not a van!
– Became the Pushmi-Pullyu at the ILA National Conference in Burlington, VT when the Pushmi-Pullyu awards were presented. Promoted a healthy ‘willing suspension of disbelief’ by sauntering around the Fryeburg Fairgrounds dressed as the Pushmi-Pullyu.
– Fell through the not-quite-fully-frozen pond ice (air temp: minus 3 degrees) and had to be thawed for several hours with hairdryers in the kitchen.
– Carried Hilary’s skis and boots up into Tuckerman Ravine on Mt. Washington for some spring skiing one April. By the end of that 3 hour hike, I could have made a lot of money hiring Tu’s services out to other hikers. After the ski (and accolades from appreciative, slightly drunk revelers), Tupac frolicked alongside us, no lead line, down the Sherburne ski trail back to the base of the mountain.
– Had a short skijoring career. Tu was not the reason it was short….he loved it way too much.

Finally, Tupac leaves the memory of his grace, intelligence, sense of humor and wise spirit on countless school children. He brightened many a day for withdrawn nursing home residents; connected with numerous children and adults with disabilities, and delighted many unsuspecting travelers on Dunn Road in North Norway. He changed and enriched my life beyond measure.

Here is a loving salute to all ‘first llamas’ and their generosity and patience. We are better for knowing you. 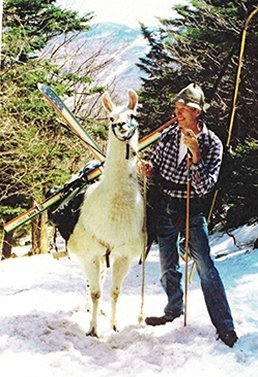 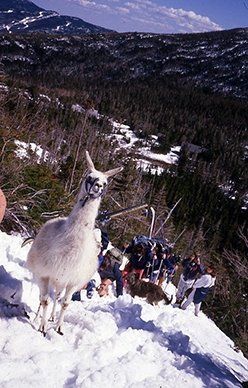 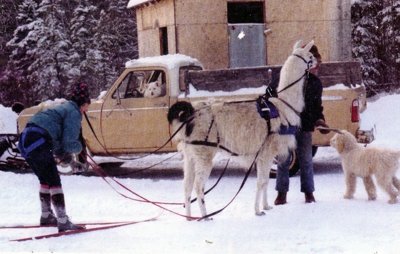 I can no longer see you with my eyes, touch you with my hands, But I will feel you in my heart forever. ~ Anonymous

How do I start to write up a memorial to one that made all my dreams come true, the start of our humble farm…the start of it all? Our farm was even named after him……
Many of you know Dakota’s story already, a wedding gift of love from my husband to me 24 years ago. He came to us untamed, spirited and wild. He went on to be a gentle soul, giving kisses to people he met along the way. He surprised children by attending their birthday parties wearing his famous hat, visited nursing homes and schools too. He made many, many public appearances, including parades and there was one parade in particular I remember, where one of his fans yelled out “DAKOTA ROCKS!!”
Dakota was the first llama at Saratoga County Fair and we were there to teach the public what llamas were all about. He was great at Public Relations and would draw a big crowd around, especially when he would try to steal drinks from an innocent bystander, put his head in a pretty ladies purse, or even steal cigarettes off the ground before we could even notice (and eat them). Yes, he had a nicotine habit and he was so quick in picking them up, you’d barely notice until he was eating it….yes I mean it, he was eating them.
If I walked away from Dakota at any of these public events, he would pace, hum and look for me until I came back. You cannot ever tell me these magical creatures don’t have feelings or souls, because I know they do. Dakota was my “protector” and always there for me. If he heard me scolding another llama he would run over and try to “rescue” me. (The only thing bad about this is that he would get mad at some llamas if I was trying to catch them!)
And I think many of you already know Dakota used to come in the house quite often. He’d lay down in front of the tv (surprised Gary the very first time) and walk around checking things out. He wouldn’t stay in the house long, but we knew he loved it. I used to walk and jog with Dakota into the Village. Back in the early 1990′s there weren’t too many llamas around, so you can imagine how many “what is that” or “is that a goat” and the other funny questions I was asked. Gosh, that was fun….
Dakota was on television many times, he loved the camera and always had to give it a big smooch. He had his picture taken with the young girl from our area that starred in “Annie” in NYC, and so many other events I cannot even begin to list. But, as Dakota got older we had to retire him from all of this. He did come out of retirement for a big party in Saratoga Springs one year and also walked in the “June Petteys Llama Walk for a Cure” (in my Mom’s memory), those were his last.
Today was a terribly sad day as we let a huge part of our family pass over the rainbow bridge…..I held onto his beautiful head tightly through it all. We are privileged to have known Dakota for all of these years…and know we will see him again someday. He is in our hearts forever…..Katrina Capasso, Dakota Ridge Farm. 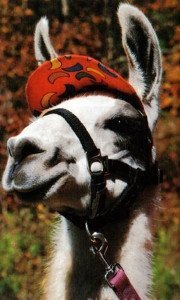 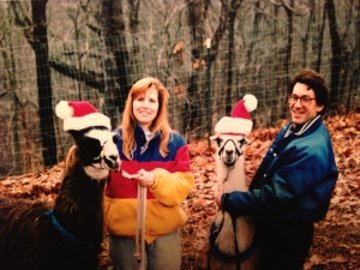 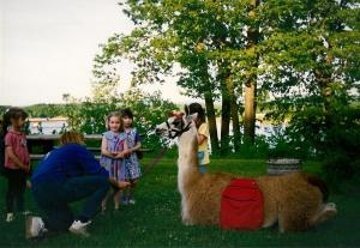